I’ve always had champagne taste and a beer budget, though that’s rarely stopped me from doing what I want—borrowed gear, nights spent in the back of my car, and a healthy relationship with Top Ramen have gotten me to plenty of summits. When it comes to adventure planning, I tend to shoot first and ask questions later.

A few weeks ago, Bix and I got an exciting invitation: a ten-day trip to Hawaii, where we’d run a few legs of a 200-mile relay and backpack in Hawaii Volcanoes National Park.

We instantly went into trip planning mode. How much would airfare be? Could we get the time off work? Would TSA confiscate our JetBoil? What’s the likelihood of my being eaten by a shark when Bix talks me into taking a crack at surfing?

As costs started adding up, we backpedaled. Airfare is expensive as shit, since, you know, it takes a lot of fuel to pilot a plane to the middle of the Pacific Ocean. At the rate I accrue PTO, I will have precisely enough in my coffers to completely wipe it out with this trip.

Plus, Bix pointed out, umbrella cocktails served in half a hollowed-out coconut are pricey.

I’ve always had champagne taste and a beer budget, though that’s rarely stopped me from doing what I want—borrowed gear, nights spent in the back of my car, and a healthy relationship with Top Ramen have gotten me to plenty of summits. When it comes to adventure planning, I tend to shoot first and ask questions later.

As we volleyed the pros and cons over tuna sandwiches one night, I thought of one of many trips I almost didn’t go on.

When I moved to Alaska for grad school, the university was running trips for incoming students—like freshman orientation, only awesome and outside. I’d signed up and posted a check the day I got my acceptance letter.

Nevermind that I’d be on a weeklong trip with a bunch of college freshman, or that I’d never sea kayaked. I wasn’t going to pass up a chance to paddle through Prince William Sound, hydrophobia be damned.

Four months later, when my then-boyfriend and I pulled into the Alaska Pacific University parking lot on four hours of sleep, I wasn’t so sure. We’d lived in Alaska exactly five days and had just signed a lease on an apartment, which had depleted most of my meager savings. I’d spent the previous afternoon staring in bewilderment at the paddling section of the Anchorage REI, wondering how dry bags could possibly be so expensive and whether I could get away with trash bags.

I remained unsure as I exploded my gear at the foot of the university climbing wall. The half-dozen other students who’d signed up for the trip appeared better prepared, at least in the sense that most had sat in a kayak a few times before we headed to the pool to learn wet exits.

When my boyfriend picked me up that evening—T-minus twelve hours until departure—I had all kinds of excuses for bailing: the deposit hadn’t been that much, anyway, and it seemed unfair to leave him to unpack our worldly possessions four thousand miles from their origin, while I traipsed about the Sound in a boat I wasn’t sure I could exit, wet or dry.

“You’ll regret it if you don’t go,” he told me, and I knew he was right. I slept fitfully and thanked him profusely when he dropped me off in the morning.

You’d be amazed how much shit you can fit in a sea kayak.

Things didn’t improve much right off the bat. The wind howled as we unloaded the boats in Whittier, and I learned immediately why down insulation was strictly forbidden on university trips. My rain gear, I feared, would not be up to snuff.

We pushed off into the bay. My boat listed badly to the right. With no idea how to adjust my foot pedals—and only a vague understanding that they were meant for steering—I comforted myself with the notion that an enormously swollen right shoulder would be a kind of souvenir of my first foray into the Alaskan wilderness.

Our little flotilla made its way through the drizzle to Decision Point, where we pulled the boats onshore and made camp. We spent an extra night on the elevated wooden tent pads, hoping to wait out a big storm. I couldn’t get that robotic marine forecast voice out of my head: “Seas six feet,” I heard it saying, nearly drowned out by the popcorn effect of rain on my tent fly. I pictured six-foot seas and didn’t like it one bit.

On the second morning of the trip, we left Decision Point—“Seas three feet,” said the radio—and paddled across the mouth of Blackstone Bay.

In the middle of the bay, the clouds so low I couldn’t see shoreline on either side, the promised three-foot waves felt enormous. By the time we’d finished the two-mile open water crossing, I was so relieved not to have capsized—not that I was anywhere near dry—I hardly cared at all that we’d spend the next few hours backtracking when we realized, in rare moments when the deluge let up, that we weren’t where we thought.

This mediocre-at-best photo was part of an approximately ten-minutes-long attempt on my part to appreciate the beauty of the incessant rain, after which I gave up and collapsed into my damp sleeping bag.

As I settled into my damp sleeping bag that night, I let myself wish for one tiny moment that I hadn’t bothered to come on this trip at all. I dreamt of hot showers and wondered how the next day would find a way to be worse than this one.

It didn’t. I woke to whoops of joy from the trip leaders: the sky was so blue I had to squint as I poked my head out of my still-dripping tent. The tide had gone out, leaving a carpet of bright orange seaweed; a lone black bear toddled out of the woods and watched us eat breakfast from across the cove.

We paddled farther into Blackstone Bay, flanked by playful sea otters through a maze of icebergs. The adjacent Blackstone and Beloit Glaciers loomed ahead; we watched them all afternoon as we dried our muggy gear in the late summer arctic sun, fell asleep to the soundtrack of their gentle groans, and awoke as they calved violently, sending hundreds of tons of ice crashing into the sea.

It was a hell of a trip.

Now, years later, the misery of my saturated rain gear has dissipated. I’m not hurting for the cash I spent; in fact, I can’t really remember anymore how much the trip cost me.

Smoke ‘em if you got ‘em, right? Because experiences are more important than stuff.

“Let’s do it,” I told Bix as we did the dishes that night. We’ll spend a few more nights eating tuna sandwiches, even when payday comes and I’m raft-guide-rich and hear my favorite Thai spot calling my name. We don’t need more clothes or shiny new gear, as tempted as we sometimes are.

As long as we have good rain gear, I think we’re set. 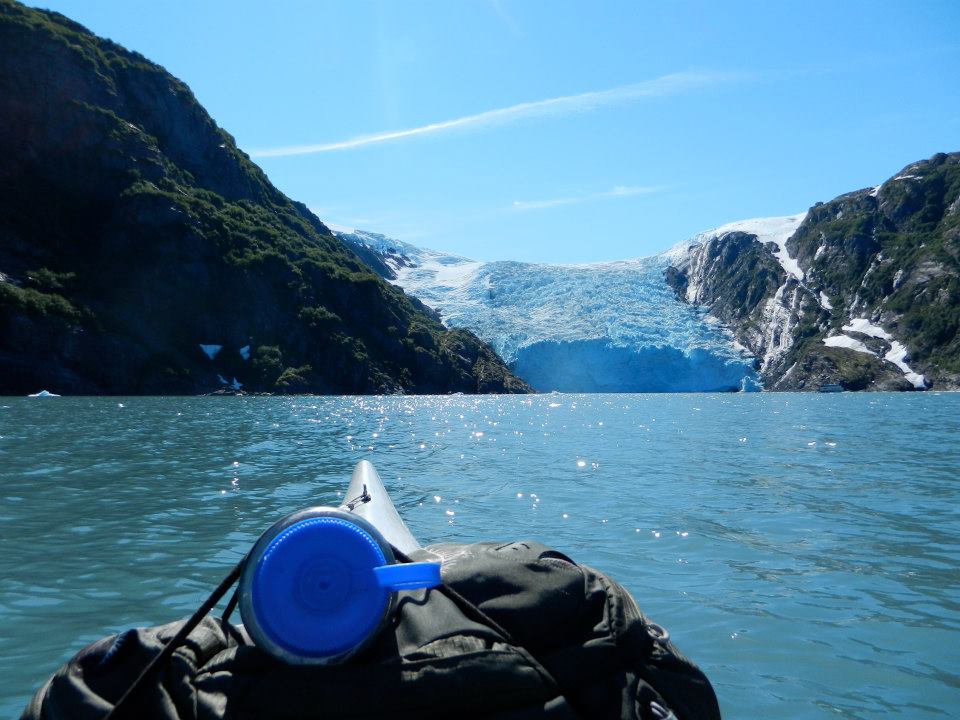