During my first year of grad school, I signed up for a course in winter wilderness skills with the intention of being fully transformed into a badass in the span of one month. It didn’t work, but I did learn one crucial badass skill: how to rig and haul a sled.

When it was announced that each student would be hauling a sled, I pictured a whimsical Victorian number, complete with red runners, a wooden deck, and a Santa Claus-style burlap sack fastened with novelty-grade hemp ropes. Basically, this model from LL Bean:

When I saw the sled I’d be hauling, I felt ridiculous for imagining something so impractical. The LL Bean model weighs in at 13.5 pounds—not exactly light-and-fast. Also, I’m not sure how well varnished maple holds up to the elements, but I’m willing to hazard a guess that 40 degrees below zero would’ve put a strain on the delicate wooden slats.

This was just a plastic kiddie sled, like the kind my dad and uncles used to haul us around on when it snowed. You can get them at the grocery store for less than ten bucks, usually, and rig them for glacier or snow travel pretty cheaply. All you need, really, is the sled, some cord in a few different thicknesses, and a drill (plus, in my case, permission from an adult to use said power tool).

The essential components are the rigging, which keeps your shit (both colloquial and literal) securely attached to the sled, something to attach the sled to your backpack, and, for downhill travel, a brake. Depending on the conditions, including whether you get pissed and destroy or throw your sled off a cliff, they can last for several expeditions. Here is how it looks when I prep a kiddie sled for a trip: 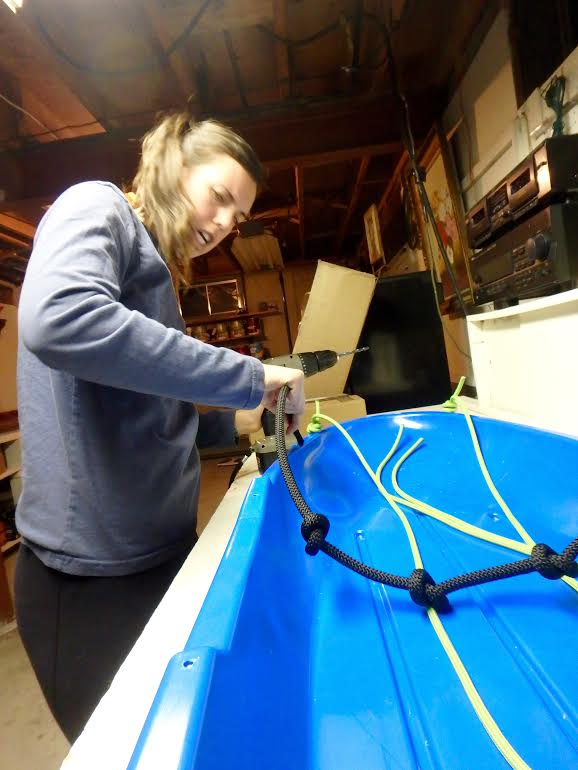 Rigging a sled (more art than science, and based largely on personal preference) is way more fun than the actual hauling of a sled, an experience practically guaranteed to leave you with bruises. In my experience, if you have not shocked and horrified yourself with the colorful string of expletives you’ve thought up to hurl at your sled, your trip probably isn’t over yet.

The moving of a sled from Point A to Point B is entirely beside the point once you’ve arrived at your destination, where the backcountry luxuries you’ve hauled in will make you extremely popular and loved. With that end in mind, I’ve taken a page out of Dale Carnegie’s How to Win Friends and Influence People, and have here replaced capitalism, distilled to its essence, with the hauling of a well-rigged sled.

Without further ado, then, an abridged version of the things Carnegie said his book would do for its readers, except I say you can do them with a plastic kiddie sled full of sausages and beer. Dale Carnegie* and I promise that properly rigging your sled and skiing it out to a cabin/yurt/snow cave/Quonset hut will:

*obviously not really
**still not actually though

Go forth, my friends, to rig your sleds and win favor among your peers. You deserve it.

One thought on “How to Rig Sleds and Influence People”

Kelly Walker was a bright light, a wickedly funny goofball, and an unwaveringly loyal friend. I am lucky to count her as my family and to have known her all my life. She passed away in her own home yesterday, surrounded by people she loved.
I am not very good at surfing but fortunately there are lots of other ways to fill your time in El Paredón, especially if you happen to be there with really great buds. Between surfing, a tour downriver to see sea turtles (!!) and an awesome cooking class with @lachozachula, I learned a lot (and also chilled hard with a few Gallos and a good book) on our trip to this beautiful country.
This 36-hour sea-to-11,858’ trek was SO cool. Tons of biodiversity, a high camp filled with languages from all over the world, an awesome travel buddy, and a VERY active volcano made for a super memorable adventure! 🌋🇬🇹
Finally nailed the self timer today on this hike with my buds. Also, Rooster’s first summit! Swipe for aftermath.
I just got home from a week in this really special place for this year’s @aiare_official women’s instructor training. Feeling super grateful for the team I get to work with, affinity spaces (especially when they are literal spaces like this sweet geodesic dome), and badass women who are making this industry better a little at a time. Thanks @basecampcascadia for an incredible week!
I really like my job and this week I’m feeling extra lucky. This was my “commute” yesterday morning: skiing to an all-women’s @aiare_official instructor training in a super cool geodesic dome as it dumped FEET of fluffy snowflakes ❄️❄️