The National Park Service turns 100 years old in 2016, and dirtbags nationwide are finding creative ways to commemorate the NPS Centennial. I, on the other hand, lack artistic sensibilities, and am thus marking the occasion in the same way I celebrate everything else: by eating. Here’s the second installment.

The National Park Service turns 100 years old in 2016, and dirtbags nationwide are finding creative ways to commemorate the NPS Centennial. (My favorite so far is the Dirtbag Diaries’Milepost series.) I, on the other hand, lack artistic sensibilities, and am thus marking the occasion in the same way I celebrate everything else: by eating. Without further ado, then, I present the next installment in this series about things I’ve eaten in national parks.

Question: How do you make dehydrated soup appetizing?

Answer: Hike until your companion’s head appears to be a bucket of fried chicken, and then hike three more miles. You are now ready to eat dehydrated soup.

Great Sand Dunes National Park and Preserve is named for the thirty-square-mile complex of dunes nestled in the crook of the Sangre de Cristo Mountains, as far east as you can get in the San Luis Valley, but the namesake dunes make up less than a third of the park’s total area. The other hundred-odd square miles are in striking contrast to the Saharan sandpile—jagged fourteen thousand-foot peaks adorned with steep, still-snowy couloirs, lush vegetation, even a few creeks that run year-round.

Like many national parks, Great Sand Dunes sees few visitors more than a mile or two from the trailhead. The campground is generally full on weekends between Memorial Day and Labor Day, jeep roads provide access to a handful of picnic sites along Medano Creek, and hikers can access the trailless dunes directly from the Visitor Center, but that’s about it.

“Hi,” Bix greeted the ranger on duty at the Visitor Center, “We’d like a backcountry permit for Sand Creek.”

“Sand Creek?” The ranger repeated the phrase slowly, skeptically, like Obi Wan Kenobi in Episode IV—”I’ve not heard that name in a long, long time.” 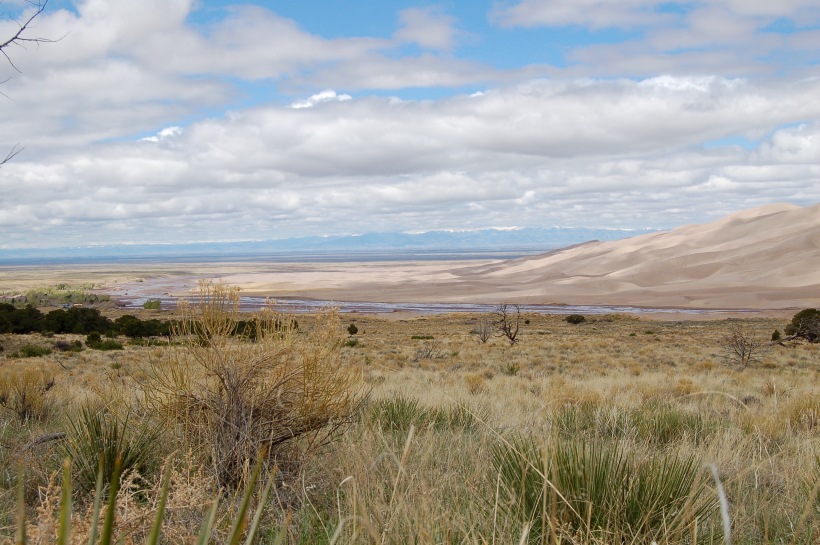 We assured him we knew the milage, that we were prepared for a long hike to the (apparently rarely-visited) NPS-maintained backcountry site. He issued the permit and sent us on our way.

Question: How do you make a twelve-mile hike—or, for that matter, any hike—more, as the NPS brochure for Great Sand Dunes puts it, grueling?

The hike from Piñon Flats Campground begins innocently enough, winding its way through the grasslands immediately east of the dunefield and occasionally darting into the margins of the rugged Sangres. Soon, though, the Sand Ramp Trail devolves into a series of cairns, indicating which wash to follow until, after crossing the jeep road, what’s been passing for a trail dissolves altogether.

Seven miles in, we crossed Medano Creek and I stopped to empty the sand from my shoes. Out poured more sand than I’d have believed could fit in my size nine trail runners; eventually, I switched to sandals, which at least let out as much sand as they let in.

Question: How do you keep bears, and also hunger, at bay?

Answer: Lots of noise, especially musical-style ballads about the qualities of tortilla soup.

The route skirts the dunefield for ten miles or so, then dips into an aspen grove as it crosses Cold Creek. Fresh black bear tracks meandered down the primitive trail, peppered occasionally by smudgy nose prints where their owner had apparently caught an interesting scent. We bid the bear adieu at the second crossing of Cold Creek.

Here, we consulted the map. Someone—I won’t name names—insisted there wasn’t another creek crossing between us and the NPS campsite; others—me, obviously—remembered the floods of 2013 and maintained that the creek’s location was probably newer than the map. 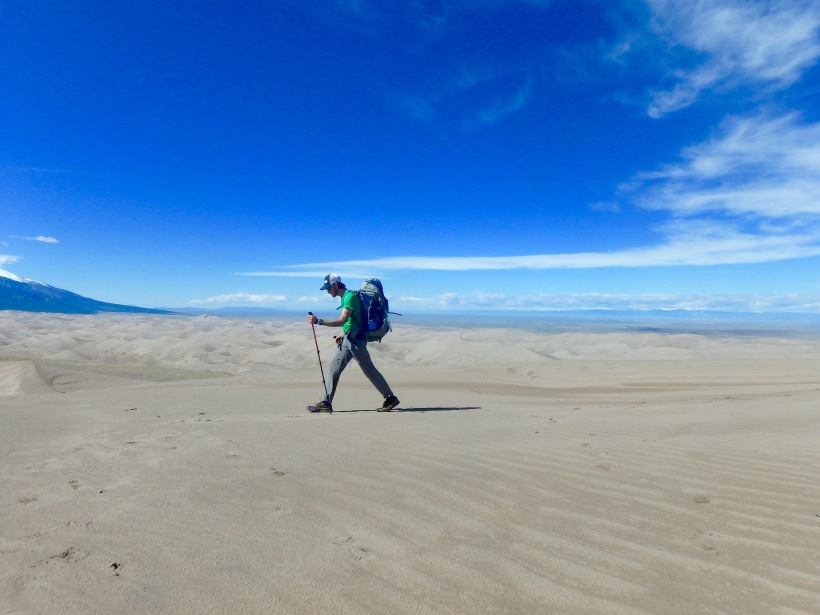 Hungry, gritty, and ready to make camp, I relented, and followed Bix to the top of the bluff. To the south lay the endless ridges and valleys of the Star Dune Complex; to the north and west, the sizeable cottonwood grove housing our intended destination.

The problem, now, was how to get there.

Question: What’ll it take to make you curse your partner, now matter how convinced you were, this morning, that you liked them very much?

Answer: Two hours of off-trail hiking, particularly through a field of cactus and yucca.

After what we later determined to be about four miles of cross-country travel, I was ready to collapse in the middle of a dry wash and remain there, in fetal position with my backpack still on, until morning. Because I am extremely tough (and maybe a little stubborn), I did not verbalize this. By the time I was ready to announce that I would gladly make camp literally wherever and truly could not care less whether we found the Sand Creek site, Bix sprinted ahead and whooped with the kind of excitement you really only feel when your partner is shooting you with eye-daggers and considering offering you up to the bear.

The Sand Creek site, as it turned out, had been worth the hike. It had a bear box and a fire ring—it’s the only backcountry site in the national park where you can burn a fire—and a reliable water source. We collected water from the creek and started the tortilla soup.

Question: Do you really have to rehydrate soup for the whole fifteen minutes?

Answer: Depends how hungry you are.

Ten minutes later, the beans were a little dry. The rice was on the crunchy side. I didn’t care. This was the best tortilla soup—nay, the best dinner—I’d ever eaten. I heaped seconds into my bowl, then thirds. Being lost, if only slightly and not for long, can make anything taste like a feast fit for a king. My belly uncomfortably full, I fell asleep the moment I finished zipping into my sleeping bag, though I’m told my still-dehydrated bean farts kept my tentmate up most of the night.

A day and a half and thirty miles later, we arrived back at the car. My feet, sharing their shoes with enough sand to render them two sizes too small, were blistered and sore, worse than they’ve been in years of backpacking. Only the promise of pizza kept me going.

Question: How do you make the most of thirty-six hours in a national park? 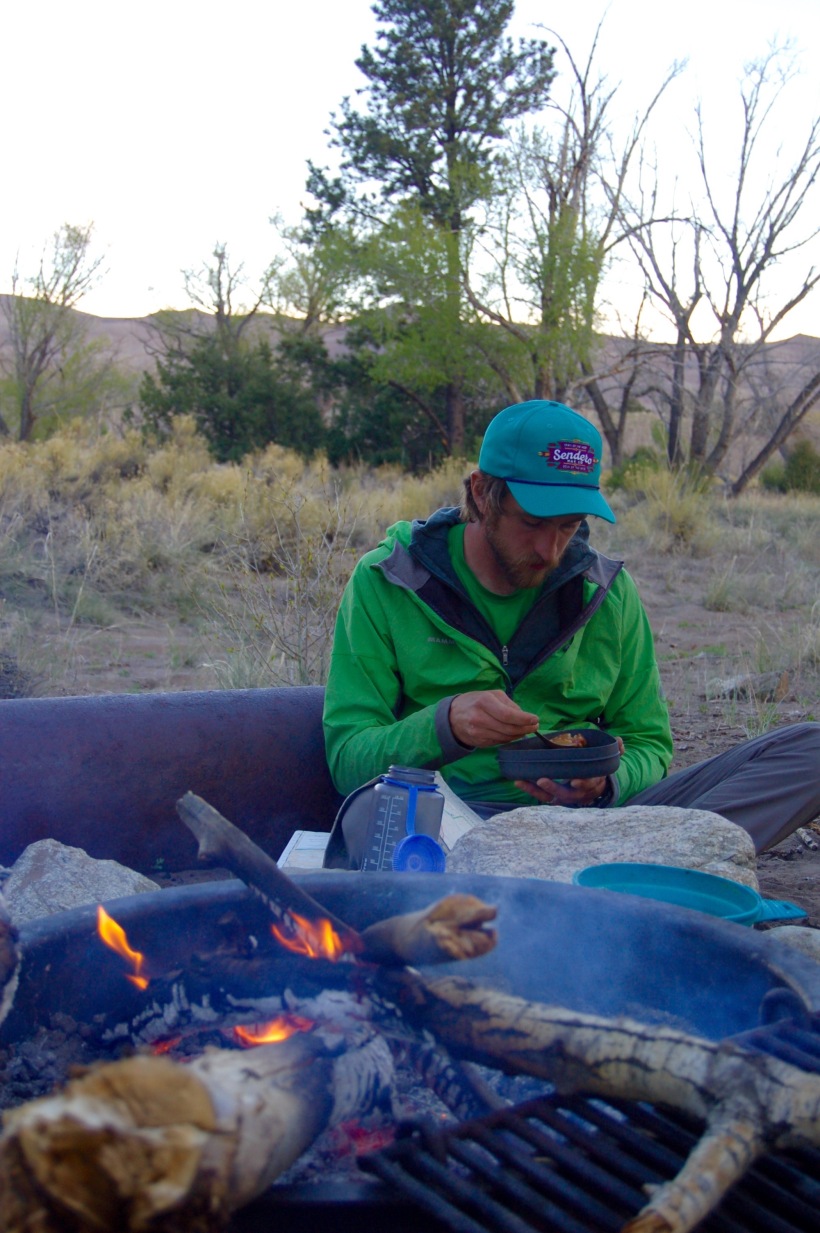